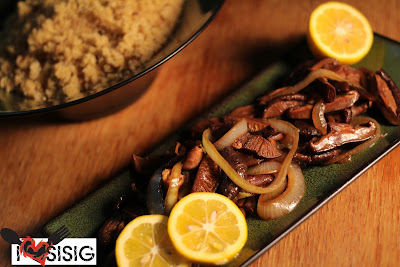 January is probably one of my favorite months of the year. It signals new challenges and brings me and my family new adventures to add to our exciting lives. This year I will be working on a few film and documentary projects which will definitely require me to be in great shape and perfect health. I'm really excited to be working on Director Matt Abaya's feature film project, Vampariah.

So eating healthy is very important to me and my family, especially since the past few months, our eating habits kind of veered from our normal healthy eating routines. But, I was very excited when Pearl of My Sassy Chef and Thea of Words and Nosh gave us the perfect theme to start the year for the Kulinarya Cooking Club. Our challenge was to create a Filipino dish that was a bit more healthier. Now, would I share a dessert, an appetizer or a main? I had a ton of ideas and thought of different takes on Filipino cuisine that would be lower in sugar, carbs, sodium and overall healthier for all. It wasn't that hard for me because I have been on a low sugar/carb, high protein diet for the past 2 years. My doctor tested me for diabetes a few years ago and the tests showed that I was pre-diabetic and my doctor challenged me to change my lifestyle a bit. Ouch! I never really though about being a diabetic and really didn't know much about the disease. So right away, I changed my diet, worked out everyday and became more aware of what I was doing with my body. In a matter of 30 days...my tests showed no signs of being close to diabetic! Awesome right! Well, I decided that it wouldn't stop there. Today, my family  continues to stay on our diets and exercise plans.


Because of social media, it's a bit easier to find healthier alternatives to dishes. This Christmas, TJ and RG of www.astigvegan invited my family to an wonderful potluck where we shared a few vegan dishes. TJ shared an awesome take on vegan bistek which was served as sliders. Totally delicious and worth trying again. So I decided that my dish for the Kulinarya challenge was going to be inspired my TJ's awesome sliders. I chose to make vegan bistek with quinoa. Why quinoa and not brown rice? Well, brown rice is a healthier alternative to white rice, but it will still spike a diabetics blood sugar and has a higher gylcemic load. It is higher in protein and has a lower carb count per serving. For more info visit http://nutritiondata.self.com/facts/cereal-grains-and-pasta/10352/2

All of the ingredients can be purchased at your local Asian grocery, farmers market. Luckily for me, my family grows most of their vegetables and I can pick directly from their backyard.


Ingredients
4 cups of sliced shiitake mushrooms (you can use the dried variety found at most Asian markets)
1/2 large white onion sliced
1/2 cup of low sodium soy sauce
2 tbsp of coconut vinegar
1/4 cup of fresh lemon juice - you can use calamansi - (because of the weather...no harvest)
2 cups of quinoa
2 tbsp of extra virgin olive oil


Directions
Vegan Bistek
If you are using the dried variety, rehydrate your mushrooms in water for about 30 minutes. Take them out of water a set aside to drain. Slice your mushrooms evenly and place in a medium bowl.Next, add your wet ingredients to your mushrooms and allow 15 minutes to marinate.  Now slice your onions into medium sized rings and set aside.


In a wok over medium heat, add your oil. Next, saute your onions for a few minutes until soft and clear. Now add the mushrooms and rest of your ingredients. Cook for about 10 minutes.

Quinoa
Place your quinoa in your rice cooker and add 4 cups of water and turn your rice cooker on. That's it! In about 15-20 minutes
( Depending on your quinoa, you might need to rinse it before cooking. Quinoa is very easy to make and can be done way faster than white or brown rice. It might be very bland for most so definitely season and add whatever herbs you like. For my recipe, I add 1 tbsp of vegan butter and a pinch of garlic salt. The butter seems to prevent any burning on the bottom of my rice cooker)

Like always my little one comes to the kitchen to see what's cooking. I told her it was bistek and didn't bother to mention it was shiitakes instead of beef. A few servings later, it really didn't matter right? I love the favor of shittake and the texture feels a bit like meat. The flavor from the lemons and the coconut vinegar perfectly satisfies my need for sweet and sour. Hope you have the chance to enjoy this recipe and try more healthier versions of your favorite foods.

Say No to Censorship

Millions of Americans oppose SOPA and PIPA because these bills would censor the Internet and slow economic growth in the U.S.

from Google
Two bills before Congress, known as the Protect IP Act (PIPA) in the Senate and the Stop Online Piracy Act (SOPA) in the House, would censor the Web and impose harmful regulations on American business. Millions of Internet users and entrepreneurs already oppose SOPA and PIPA.
The Senate will begin voting on January 24th. Please let them know how you feel. Sign this petition urging Congress to vote NO on PIPA and SOPA before it is too late.

Thank you!
Fred
Posted by sisigblogger at 10:12 AM No comments: